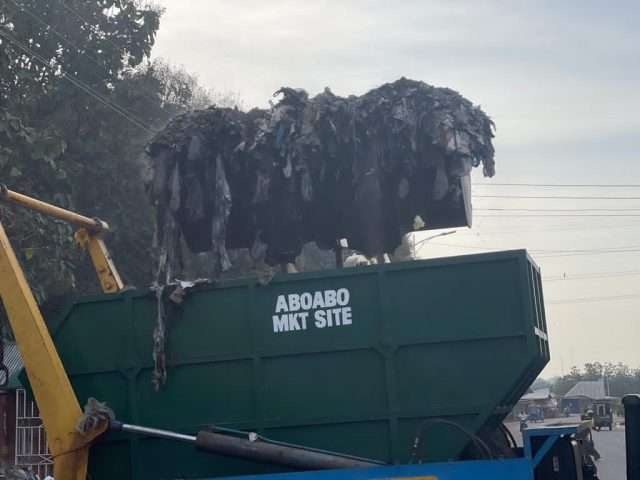 The Tamale Metropolitan Assembly (TaMA) has swiftly moved to evacuate the heap of garbage along the Nyohini roundabout road towards the Aliu Mahama Sports Stadium in the metropolis on Saturday, October 30, 2021.

The exercise comes in the wake of concerns raised in the public about the imminent danger and health implications connected to insanitary condition.

Mr Amadu Mustapha, the Public Relations Officer of the Tamale Metro Assembly explained in an interview that, sanitation has become a huge development challenge in the metropolis.

According to him, the increasing insanitary condition in the area is attributed to the fast growing population in the northern regional capital.

He recalled that the assembly had designated a communal waste collection container serving the Nyohini North electoral community and its surroundings.

However, the refuse container was relocated resulting in the residents dumping their plastic waste materials haphazardly.

“The neighboring community members who otherwise were patronizing the services here had no option than to dump it on the floor and this has been taking place for quite some time now” he indicated.

He noted the situation was fast becoming dangerous for public safety and the attention of the Tamale Metropolitan Chief Executive, Hon Sule Salifu, was drawn to the looming danger.

The Tamale Metro Assembly Public Relations Officer said this has brought undue pressure on the city authorities to ensure the swift evacuation of the garbage.

Nonetheless, Mr Amadu Mustapha noted the assembly has been able to mobilize the needed resources to undertake the evacuation exercise to the final disposal site.

Meanwhile, the Assembly Member for the Nyohini North, Ibrahim Abdul Razak Naporo, for his part expressed his excitement for the evacuation of the refuse.

He said hitherto the community members were so worried about the environmental pollution caused by the heap of garbage especially traders along the principal street and motorist.

The Assemblyman said a new container will be stationed there to curb the indiscriminate dumping of waste in the area and seized the opportunity to commend the Mayor of Tamale and the assembly for the timely intervention.

Man burnt to death in Tamale after crashing with truck