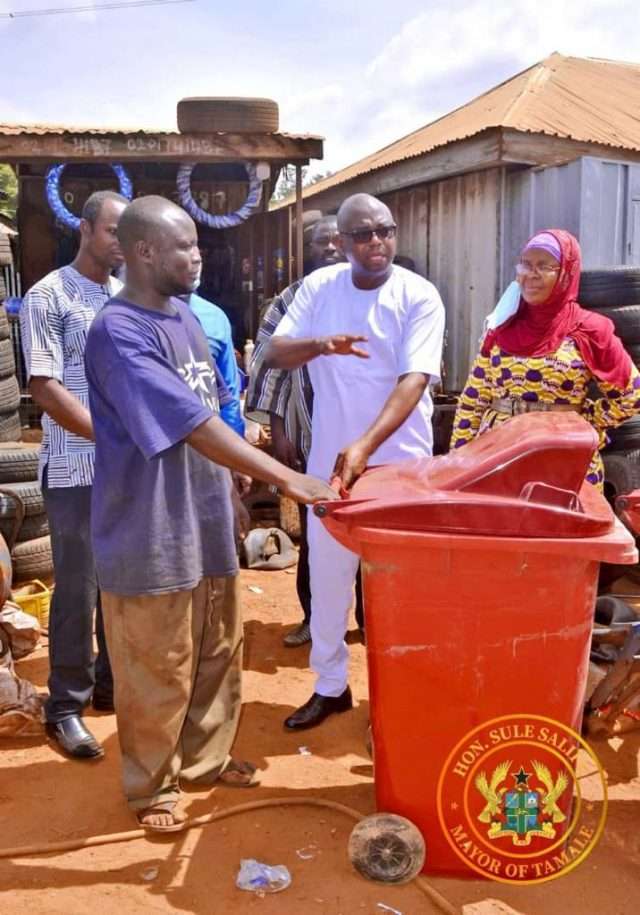 The Tamale Metropolitan Assembly in partnership with waste management company, Zoomlion Ghana Limited, on Monday (November 1, 2021) distributed a number of waste bins to some traders in the Tamale metropolis. The company also provided two communal containers to some major restaurants in Tamale to curb the indiscriminate spread of plastic waste materials in the regional capital.

The move forms part of measures taken by the city authorities to contain filth in the metropolis in collaboration with the waste management group.

The Mayor of Tamale, Sule Salifu, prior to the distribution exercise called on the Chief of Nyohini, Naa Mahamudu Abdulai and Juong Naa Sulemana Sumani at their respective palaces to solicit their full support and endorsement.

He noted that the traditional leaders have huge responsibilities to ensure a clean and healthy environment and encouraged the chiefs to reintroduce communal labor to improve sanitation in the traditional jurisdictions.

He later sensitized some traders and shop owners along the principal streets on the importance of maintaining good sanitation at their workplace and shared a dozen of the Zoomlion 240 liter bins to individual shop operators.

In an interview with Journalists, the Tamale MCE noted the poor sanitation conditions in Tamale is worrying and therefore, require the collective involvement of all stakeholders including the chiefs, religious and opinion leaders.

The Metro Assembly he noted is out to collaborate with its development partners, especially, the chiefs who are the custodians of the land.

“There is so much filth in Tamale and those of us residing in the town are the primary cause of it and the chiefs, religious, opinion leaders have all agreed to that; so for us at the Tamale metro assembly, we‘re out to collaborate with these stakeholders and to lead the campaign but we cannot achieve this whilst some people still dispose rubbish indiscriminately and that is why the Zoomlion is supporting us with the waste bins”

He disclosed the assembly over the weekend incurred an amount of GHS12, 000 to provide fuel for the waste management company to evacuate the heap of garbage near the Aliu Mahama Sports Stadium in the quest to prevent disease outbreak in the community.

According to the Mayor, the TaMA could’ve use the said amount to provide furniture for school children or borehole for any underserved community to benefit.

Mr Sule Salifu mentioned the bins distributed are part of measures deplored to ensure waste is not brought back to the area and assured that all other refuse dumps in the metropolis will be evacuated in due time.

He noted some compaction tracks on standby to lift the waste bins placed around the city and assured this will done frequently and regularly to avoid spillage.

UK government waits for more data before acting on schools

Admin - March 29, 2020 0
The Sagnarigu Municipal Assembly has announced a compulsory 14-day quarantine of residents of the municipality returning from the coronavirus pandemic hit...