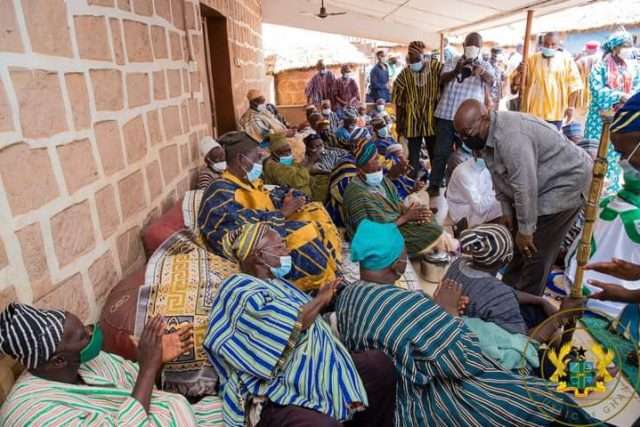 The President, Nana Addo Dankwa Akufo-Addo has expressed his heartfelt gratitude to the Overlord and people of the Mamprugu traditional area in the North East Region for the resounding victory they gave him and the ruling New Patriotic Party (NPP) in the 2020 general elections.

Addressing a durbar of Chiefs in Nalerigu, Tuesday (22 June, 2021), Nana Akufo-Addo thanked the Nayiri, Naa Mahami Abdulai Bohagu Shariga, his elders and the people of the North East region for their strong show of support to retain him and the New Patriotic Party (NPP) in government to steer the affairs of the country.

President Akufo-Addo had 122, 742 votes to beat his closest contender John Mahama who secured 112, 306 votes in the presidential race. The governing NPP won four out of the six parliamentary seats in the region with the opposition NDC managing just two seats.

Nayiri, I have to confess that I am though disappointed a little bit, not too much but a little bit, that both Bunkprugu and Nalerigu/Gambaga escaped from our net, especially since the two important members of my government were our candidates in those two constituencies” he stated.

Notwithstanding that, the President commended the Mamprugu King for his public show of support towards the 2021 population and housing census in few days’ time.

“I want to put on my appreciation for your words of commendations of our government and the various matters and policies that you’ve seen that are improving the lives of our people” he added.

Meanwhile, the Nayiri, Naa Mahami Abdulai Bohagu Shariga in his remarks stated the 2020 victory of the NPP was an approval of the good work and policies implemented in the last four years by the Akufo-Addo administration.

He further lauded Nana Akufo-Addo for offering appointments to the former Member of Parliament for Nalerigu/Gambaga, Hajia Alima Mahama as Ghana’s Ambassador to United States of America, and the Members of Parliament for Yagaba and Walewale, Mustapha Yusif, Minister for Youth and Sports and Hajia Zuwera Lariba Abudu, Deputy Minister Designate for Gender, Children and Social Protection respectively.

He will end the two-day working tour of the region on Wednesday with a visit to the Mamprugu Moagduri district.