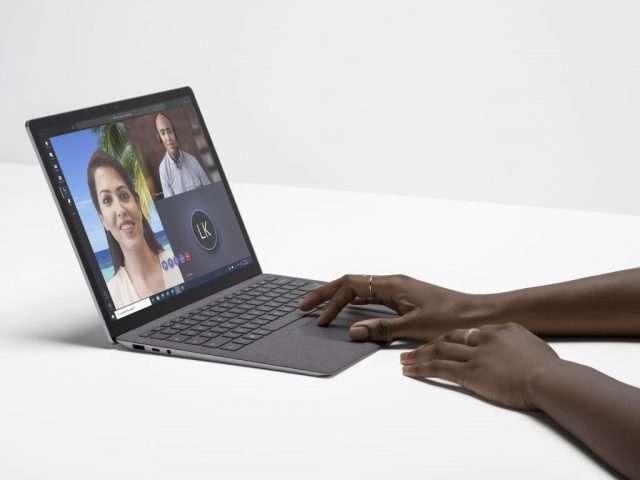 Microsoft officially unveiled the Surface Laptop 4 last Tuesday. As with the Surface Laptop 3, the new device starts at $999.99 and comes in two sizes: 13.5-inches and 15-inches. The only significant difference is that it packs new and updated processors.

Microsoft kept everything the same design-wise. It has a clamshell build with a touchscreen display (201 PPI), built-in HD front-facing camera, a studio microphone array, and Dolby Atmos speakers. You’ll have the choice between an Alcantara or metal finish in sandstone, black, platinum, and a new ice blue color — depending on the configuration.

And, speaking of configurations, there are a variety of options.

The 13.5-inch Surface Laptop 4 packs an AMD Ryzen 5 processor that’s available with either 8GB or 16GB of RAM with 256GB of storage — both of which are only available in the platinum Alcantara finish.

If you opt for the second one, it’s worth noting that it’s a bit pricier, at $1,199 and won’t be available for another couple of months. Microsoft has yet to confirm exactly when.

The 15-inch laptop has an AMD Ryzen 7 processor and is a bit more complicated in terms of configurations. It’s available in:

If you don’t need a processor as beefy as the AMD Ryzen, then you can choose between an i5 or i7 11th Gen Intel Core processor with the 13.5-inch model. The configurations include:

3.5M Ghanaians Get Internet Connectivity By 2023

Digital Skills To Be Required In Entrepreneurship – Ursula

US Unemployment Sees Surprise Improvement In May

Admin - March 16, 2022 0
While the controversy around the implementation of the electronic transfer levy (e-levy) is still raging on, the Ghana Revenue Authority (GRA) has issued guidelines...
Tech

Selasi Aklotsoe - April 19, 2022 0
The United States has become the first country to announce a ban on missile tests against space satellites. US Vice-President Kamala Harris, who chairs...
News

Get Involved In ICT Sector – Ursula To Ladies

Admin - February 16, 2021 0
Minister Designate for Communications and Digitalization Ursula Owusu-Ekuful, has revealed that the introduction of the Kelni GVG platform made a cost saving of $1.1...
Business

Admin - June 4, 2021 0
President Nana Addo Dankwa Akufo-Addo has stated that Government is employing the application of digital technology to stimulate the growth and transformation of the...