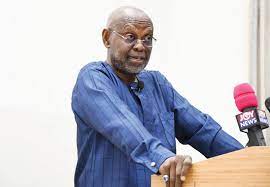 Professor Kwesi Botchwey has shared the advice the people in his circle gave him about the current NPP Government on the level of intolerance against dissenting views in Ghana.

The former Minister for Finance and Economic planning shared the words during the One Ghana Movement public lecture at the University of Ghana on Monday.

“These people are vindictive, and they’ll come after you if you criticise them, they said. I was quite dismayed and wondered if this was truly reflective of the public sentiment in our time” he stated.

The NDC stalwart who was speaking on the state of the economy claimed his colleagues discouraged him from commenting on any negative situation he finds under the Akufo-Addo Government.

Recounting whether his friends had missed the plea of the President during the 2017 inaugural speech for Ghanaians to ‘Citizens and not Spectators’, the Lawyer remarked: “Or whether these friends had perhaps missed His Excellency the President’s exaltation to us in his inaugural address in 2017 to be citizens, not spectators, which exaltation I was sure he meant in earnest”.

This was at the Independence Day event, held at the Cedi House of UG’s Department of Economics, under the theme, “On the State of the Nation’s Economy and Politics: 65 years after independence – The Path to Sustainable Development and Democratic Consolidation.”

Ex-gratia Refund Must Not Denigrate Others – Fatimatu Abubakar

Ghana Alhassan is engaged in theatrics to court sympathy votes –...

Face reality, you have bad candidate for 2020 general election –...

Admin - May 15, 2020 0
The New Patriotic Party (NPP) has challenged the National Democratic Congress (NDC) to face the reality that they have an albatross around their necks...
General News

Admin - March 24, 2020 0
Speaker of Parliament, Professor Aaron Michael Oquaye has expressed disappointment that an internal memo from the Minority leader intended for his office has...
General News