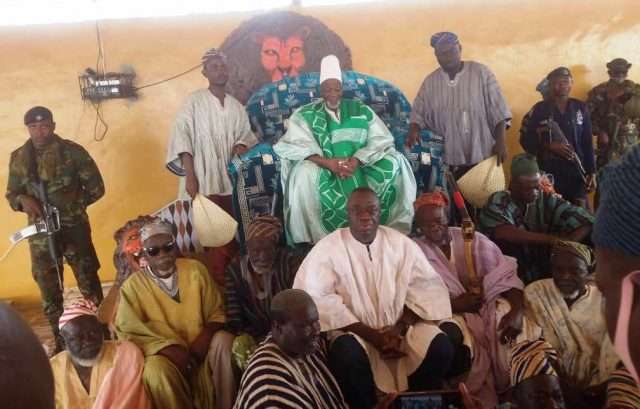 The Minister for Tourism, Arts and Culture, Dr Ibrahim Mohammed Awal has announced plans of government to construct a museum in Yendi to preserve the rich historic artifacts in the northern region for tourism attraction.

Dr Ibrahim Awal in a day’s working tour of the northern region visited the historic grave site of Kambon Na Kpem Ziblim, who was killed by the Germans during the Adibo war in 1896 between the German colonial masters and Dagombas and the graveyard for the Germans who also lost their lives during the war.

The Minister also traveled to the area where the Greenwich Meridian line passes through the Yendi municipality as part of efforts to identify and develop at least two historic sites in each of the 16 regions of Ghana.

In a media interaction, Dr Awal said the move is to revamp the sector to attract both domestic and foreign tourism that would create employment and money for Ghanaians.

The minister targets to create about 1 million jobs within the tourism industry compared the current number of about 600, 000 jobs.

He noted 1.1 million tourists visited Ghana during the Year of Return in 2019 which fetched the country an amount of 3.3 billion US dollars, stating tourism must be the number one contributor to GDP in the country since the country’s natural resources such as gold, oil and gas are exhaustible unlike tourism which he emphasized is not exhaustible.

However, he added the restrictions imposed on travels and boarder closures amidst the Covid-19 pandemic outbreak affected the sector in 2020.

According to the Tourism Minister, the Ghana Tourism Authority (GTA) anticipates the arrival of some 1.5 million tourists into the country in 2022 following the ongoing Covid-19 vaccinations and the reopening of the borders and restrictions being relaxed in the country.

“An average tourist spends about $3, 000 dollars when they come to Ghana and if we have about 1.5 million people coming, it means we would be making about $5 million dollars annually and that’s for foreign tourism.

We also want to promote domestic tourism and, we encourage Ghanaians to move around the country to see our culture and tourist attractions and when we move around, we get to know the country very well, we strengthen national unity and cohesion and we also energize the local the economy because we spend money” he explained.