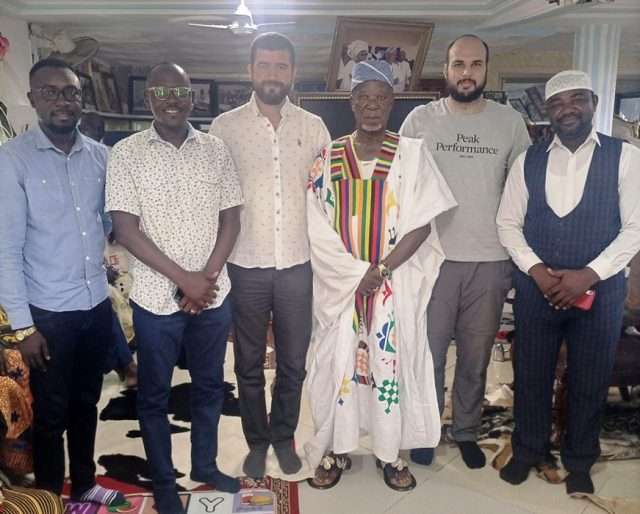 Officials of ESRA Foundation, a subsidiary of HUDAI Foundation and the West Africa Humanitarian Aid (WAHA) have held discussions with the Paramount Chief of the Buipe Traditional Area in the Central Gonja district, Buipewura Mahama Abdulai Jinapor II as part of steps to provide emergency relief support to victims of the flood in the district capital.

As a result of the opening of the Bagre dam in neighboring Burkina Faso, hundreds of houses, school blocks and shops got submerged last week.

The Northern Regional Correspondent of The Custodian Newspaper, Mohammed Gadafi, reported about the disaster and its socioeconomic impact on the livelihood of the people.

This got the attention of officials of the Turkish based nongovernmental organizations to swiftly move Tuesday morning, October 25, to engage stakeholders in the area to have first-hand information about the natural phenomenon.

Buipewura Abdulai Jinapor II in his welcome remarks thanked the philanthropists for their intervention and lamented the disaster has further worsen the plight of the people.

“We’re now in critical situation because there’s no drinking water for the people. The pumping machine supplying water to the entire Buipe has been taken over by the flood waters; unfortunately there’s no alternative source of portal water for the people – cholera outbreak is high because the people will be forced to drink from the river which has been flooded with all kinds of substances” Buipewura bemoaned.

The Executive Director of ESRA, Mr Mohammed Naziru told the Custodian Online that his outfit has been working in the northern sector for several years now in the areas of education, health, infrastructure and social relief services in mitigating the impoverishment of the underserved communities.

For his part, Mr. Selman Ozpinar, the representative of the West Africa Humanitarian Aid noted the urgent plan is to provide food packages and clothes to support the displaced inhabitants.

The delegation further discussed long-term mutual developmental strategies with Buipewura Jinapor that would go a long way to promote growth in the Savannah Region in the near future.