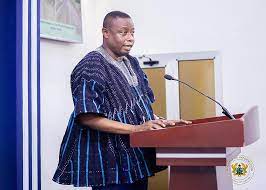 The Savannah Regional Minister, Mr. Muazu Jibril, has disclosed the United States Army is exploring the region for lithium deposits for the manufacturing of batteries to support their communication systems.

The move comes in the wake of a visit to the United States of America by a delegation of Chiefs led by Buipewura Mahama Abdulai Jinapor II and some government officials to woo investors in the diaspora to the Gonjaland to create job opportunities for the teeming unemployed.

Addressing the 2022 Damba of Buipewura Jinapor II over the weekend, Mr. Jibril noted, “Jira, only those who are close to you can tell how passionate you’re for the development of Gonjaland as Vice President of the Gonja Traditional Council”

The Minister stated, “As we speak, the entire diaspora is coming to build their headquarters here in the Savannah Region particularly in Damongo. That is one of the fruits your travel to the United States has brought to the people of Gonjaland.”

He added the government has also taken steps to construct the Savannah Regional hospital as part of its rapid agenda for infrastructure development in the region.

The Savannah Region is one of six newly created regions in 2019 by the Akufo-Addo administration in addition to the existing 10 regions to bring local governance closer to the people.