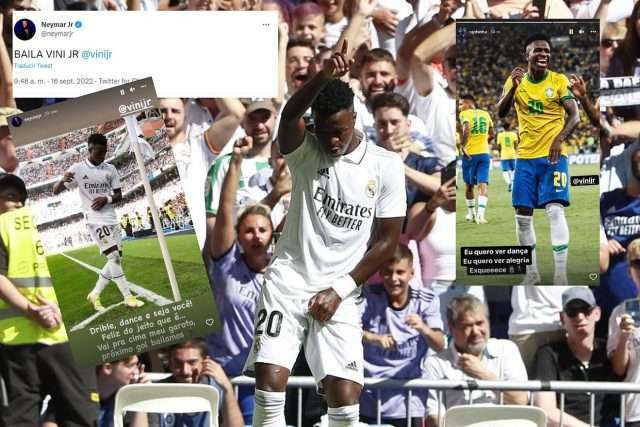 With a Madrid derby on its way in LaLiga Santander, the tension has been turned up a notch, and again Vinicius Junior is at the centre of all the attention.

The Real Madrid star was the target of some tough physical treatment from Real Mallorca last time out domestically, with his frustration almost boiling over as a result. Now, Atletico Madrid midfielder Koke appears to have sent a word of warning his way ahead of Sunday.

“At the end of the day if he scores a goal and decides to dance it’s his call. To each his own and everyone celebrates the way he likes,” said Koke.

“There would be trouble for sure, it’s normal.”

To stir the pot further, Brazil teammate Neymar was one of many players to have come to Vini‘s side, encouraging him to be himself.

“Dribble, dance and be yourself, happy to be who you are! Go for the top, my friend, we will dance on your next goal,” Neymar wrote on Instagram.

He also tweeted his encouragement for Vinicius, and the Real Madrid man shared his countryman’s post, adding: “Always,” along with an emoji of a man dancing and another of a laughing face.

Tension ahead of the Madrid derby

Tension is higher than it would have otherwise been after this recent exchange, and Antonio Rudiger recently said that “it’s understandable that some defenders want to hurt him” after the Mallorca incident.

Now, against Atletico, it will be interesting to see how Diego Simeone sends his players out to manage the threat of Vinicius.

Vini has five goals in eight games for Real Madrid so far this season, leading the scoring charts for Los Blancos. With Karim Benzema absent on Sunday, he will be their main attacking threat against Atletico.

We need information on 2020 poll – Minority to Jean Mensa