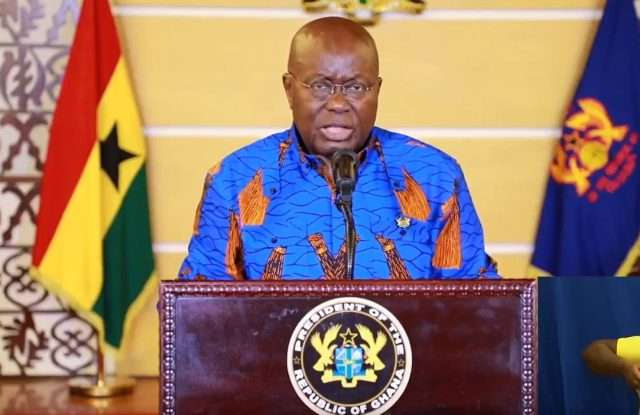 President Nana Addo Dankwa Akufo-Addo has announced that government will review the standards required for imports into the country as part measures to stabilise the Ghanaian cedi.

His administration, he reiterated, will prioritise the imports, as well as review the management of the country’s foreign exchange reserves, in relation to imports of products such as rice, poultry, vegetable oil, tooth picks, pasta, fruit juice, bottled water and ceramic tiles, and others which, with intensified government support and that of the banking sector, can be manufactured and produced in sufficient quantities in Ghana.
“Government will, in May 2023, that is six (6) months from now, review the situation. We must, as a matter of urgent national security, reduce our dependence on imported goods, and enhance our self-reliance, as demanded by our overarching goal of creating a Ghana Beyond Aid”, he stressed.

President Akufo-Addo announced these measures when he addressed the nation on the economy and the steps government is taking to stabilise the economy and put it on the path of growth.

“The success of our efforts at diversifying the structure of the Ghanaian economy from an import-based one to a value-added exporting one is what will, in the long term, help strengthen our economy. “We are making some progress with the 1D1F but our current situation requires that we take some more stringent measures to discourage the importation of goods that we can and do produce here.

“Much as we believe in free trade, we must work to ensure that the majority of goods in our shops and market places are those we produce and grow here in Ghana.

“That is why we have to support our farmers and domestic industries, including those created under the 1-District-1-Factory initiative, to help reduce our dependence on imports, and allow us the opportunity to export more and more of our products, and guarantee a stable currency that will present a high level of predictability for citizens and the business community.

“Exports, not imports, must be our mantra! Accra, after all, hosts the headquarters of the Secretariat of the African Continental Free Trade Area”, President Akufo-Addo reiterated.

No ‘Haircuts’ On Govt Bonds

The President also assured all Ghanaians that no individual or institutional investor, including pension funds, in Government treasury bills or instruments will lose their money, as a result of our ongoing IMF negotiations.

“There will be no ‘haircuts’, so I urge all of you to ignore the false rumours, just as, in the banking sector clean-up, Government ensured that the 4.6 million depositors affected by the exercise did not lose their deposits”, he stated.

President Akufo-Addo said he has “total confidence in our ability to work our way out of our current difficulties. We are not afraid of hard work.
“We will triumph, as we have triumphed many times before. Let us unite, and rally around our Republic, its institutions and its democratic values, and insist that, under God, we will emerge victorious from our current difficulties.
“For this too shall pass, as the Battle is the Lord’s”.

President Akufo-Addo pledged to be addressing Ghanaians regularly to keep them updated about the measures government is making to move the country forward, and tackle our economic challenges.

He entreated Ghanaians to remain calm whilst government works hard to improve the economy and take the people out of the current difficulties.

“The recent turbulence on the financial markets was caused by low inflows of foreign exchange, and was made worse in the last two to three weeks, in particular, by the activities of speculators and the Black Market. An anonymous two-minute audio message on a WhatsApp platform predicting a so-called haircut on Government bonds sent all of us into banks and forex bureaus to dump our cedis, and, before we knew it, the cedi had depreciated further.

“All of us can play a part in helping to strengthen the cedi by having confidence in the currency, and avoiding speculation. Let us keep our cedi as the good store of value it is. To those who make it a habit of publishing falsehoods, which result in panic in the system, I say to them that the relevant state agencies will act against such persons.

“Indeed, some steps have been taken to restore order in the forex markets and we are already beginning to see some calm returning. We will not relent until order is completely restored”, he added.

According to President Akufo-Addo, there is enhanced supervisory action by the Bank of Ghana in the forex bureau markets and the black market to flush out illegal operators, as well as ensuring that those permitted to operate legally abide by the market rules.

“Already some forex bureaus have had their licenses revoked, and this exercise will continue until complete order is restored in the sector;
“Fresh inflows of dollars are providing liquidity to the foreign exchange market, and addressing the pipeline demand;

“The Bank of Ghana has given its full commitment to the commercial banks to provide liquidity to ensure the wheels of the economy continue to run in a stabilized manner, till the IMF Programme kicks in and the financing assurances expected from other partners also come in;

“Government is working with the Bank of Ghana and the oil producing and mining companies to introduce a new legal and regulatory framework to ensure that all foreign exchange earned from operations in Ghana are, initially, paid to banks domiciled in Ghana to help boost the domestic foreign exchange market; and

“The Bank of Ghana will enhance its gold purchase programme”, he concluded.