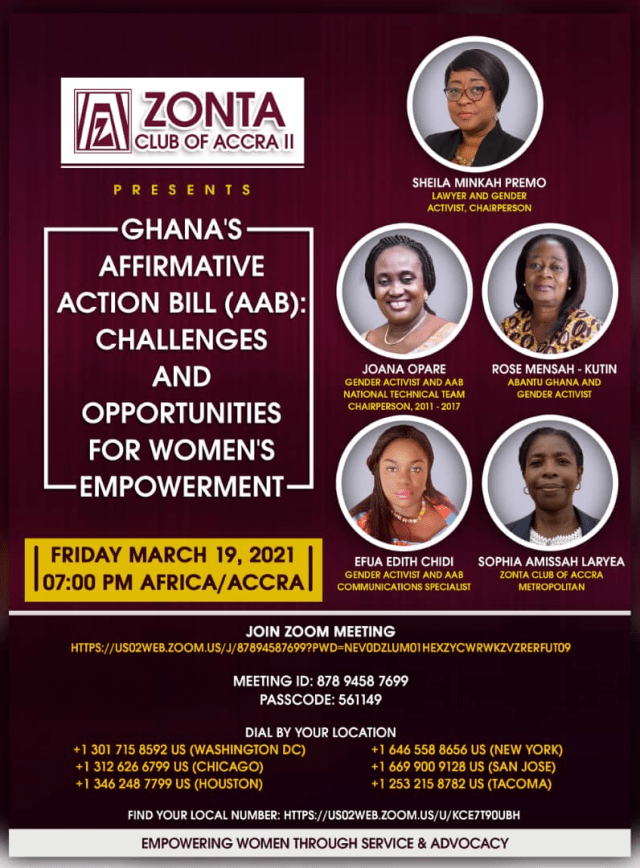 Zontians worldwide celebrate Zonta Rose Day on March 8, as we reflect on the worldwide voluntary work done by Zontians, to improve the status of women due to the inequalities women face socially, economically and politically.

Zonta International with its members work at the international, national and local levels to realize our vision of a world in which women’s rights are recognized as human rights and every woman is able to achieve her full potential; where women have access to all resources and are represented in decision-making positions on an equal basis with men, and where no woman lives in fear of violence.

The theme for this year’s International Women’s Day is “# I CHOOSE TO CHALLENGE” and in line with this theme, Zonta Clubs in Ghana are drawing attention to the setbacks facing the passage of the Affirmative Action Bill (AAB) to push for the speedy passage of the Bill.

In this regard, as part of the activities organised by Zonta Clubs in Ghana during the IWM, Zonta Club of Accra II organised a webinar on March 19, 2021 entitled: “Ghana’s Affirmative Action Bill: Challenges and Opportunities for Women’s Empowerment”.

The aim of the webinar was for Zontians in Ghana to be well briefed about the AAB’s provision and purpose and to build consensus on what Zonta Clubs in Ghana can do, in collaboration with the AAB Coalition to ensure the speedy passage of the Bill.

The main Resource Persons for the webinar were key Champions of the AAB, many of whom have been promoters of the AAB from inception including: Joana Opare, Rose Mensah – Kutin, Sheila Minkah – Premo and Efua Edith Chidi.

In presenting the overview of the AAB Rose Mensa Kutin, Executive Director of ABANTU Ghana mentioned that Ghana as part of the International Community has to constantly align itself with best practices for development and democratic governance.

Gender inequality a major issue confronting all countries of the world. The United Nations (UN) has seen that Affirmative Action is one of the ways to achieve gender equality in all spheres of life since Women’s empowerment is the process of empowering women which means accepting and including marginalized women’s groups into the decision-making process.

The Key Provision of the AAB addresses critical areas where there is the need for gender equality including a 40% threshold in:

Some key Clauses of the AAB include Clause 1 which deals with the principles of gender equality. As such, the object of the law is to ensure the progressive achievement of gender equality in political, social, economic, cultural and educational life within five years after which period it is subject to re-evaluation. Clause 9 provides a 40% quota for women in governance and decision-making positions. This applies to the public service generally, the Council of State, the independent constitutional bodies such as Parliament and boards of state institutions.

If passed, the law would provide for a process of addressing major discriminatory practices and inequalities of the marginalised groups both in the public and private sector towards fairness and social justice in employment, politics and socio-economic areas of life.

The AA Bill is a legislation that would make the plan for gender equality mandatory, actionable and provide a basis for monitoring and holding public organizations to performance.

All Resource persons emphasized that the current 14.45% representation of Women Members of Parliament was a too far short of the 40% subscribed by the AAB for women in key decision – making organisations.

It was echoed by the presenters that since the AAB is about shifting power relations between men and women in decision – making positions, the process of passing the AAB has dragged for more than 10 years.

Zontian Sophia Amissah Laryea of Zonta Club of Accra Metropolitan in her submission spelt out the role that Zontians in Ghana can play in ensuring the passage of the AAB by the current Parliament in the following areas:

All Zonta Clubs in Ghana have therefore initiated actions to join hands and committed to work with the AAB Coalition to engage key influencers and stakeholders to ensure that the necessary attention is given to the passage of the AAB by the current Parliament.

NCA Dragged To Court Over Directives On SIM Re-registration