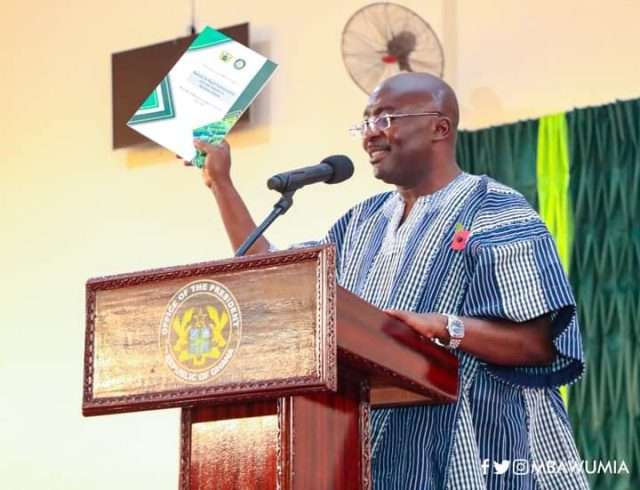 The Vice President, Dr Mahamudu Bawumia, has launched a five-year Comprehensive Medium-Term Development Strategic of the Northern Development Authority (NDA) to accelerate development in the Northern/Savannah ecological zone from 2022 to 2027.

The document is interconnected, aligned and focuses on promoting socio-economic growth and climate change adaptation whilst unlocking the potential of the area by building synergies of actors and building the resilience of the people to create wealth and restore the environment.

Dr Bawumia launched the MTD when he addressed the Northern Ghana Development Summit and Investment Fair last Wednesday, November 2, 2022, at the University for Development Studies (UDS) Tamale campus. The summit was held on the theme: “Agenda for Rapid Transformation and Job Creation in a Secure and Peaceful Northern Ghana”.

In his address, Dr Mahamudu Bawumia stated the first five objectives of the MTDS are guided by the   Government’s Medium Term Development Framework (2022-2025) vision to “create an optimistic, self-confident and prosperous nation, through the creative exploitation of our human and natural resources, and operating within a democratic, open and fair society in which mutual trust and economic opportunities exist for all”.

“I am sure that within the next couple of years, the Northern Development Authority shall contribute to the realization of the national vision and the global commitments that that Country has signed to. More specifically, your contribution shall be measured by that number or percentage of people and households you are able to move from poverty and transform the lives of our people.”

According to the Vice President, the development of Northern Ghana is very important to protecting the country against the terrorist threats coming from the Sahel regions and further intimated this has become an issue of national security.

“When we look at what is happening in our neighboring countries – Mali, Niger, Burkina Faso, we’re all very aware of the terrorists threats that are coming towards us and one of the clearly accepted literature of conflict is that conflict turns to thrive where there poverty, deprivation and exclusion and this is where terrorists take advantage” he emphasized.

Dr Bawumia maintained the efforts of government and Chiefs in addressing peace in Dagbon remains a single effort that should serve as a template for the Chiefs in the Northern Zone to work in partnership with government to address insecurity and promote a cohesive society using the rich culture of northern Ghana.

On the back of this, the Vice President called on the traditional authority use their traditional cultural linkages and ties which is based on partnerships, and collaboration to mobilize the energies of the youth and women to embrace the NDA Strategy and to work in oneness with the authority and Development Partners to implement this strategy of “leaving no one behind”.

Meanwhile, the Chief Executive Officer of the NDA, Mr. Sumaila Abdul-Rahaman for his part said the Chiefs and people of Northern Ghana must take ownership of the development strategy so as to ensure their collective efforts translate into the wellbeing of all, stating the presence of the development partners signifies their continues commitment and dedication to the course of the area.

According to him, the challenges’ confronting the northern ecological zone range from its hostile geography to conflict and as a result the 2021 summit identifies key actions that were considered critical to transforming Northern Ghana.

“…And I am happy to report that the NDA has made progress in tackling some of these actions moving forward and has institutionalize many of them by incorporating them into the strategy that we have developed” he assured.