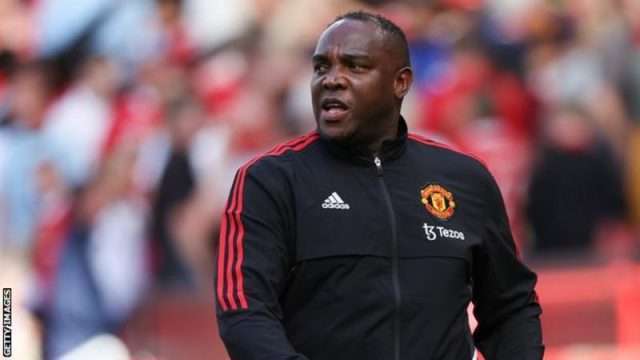 As a boyhood Manchester United fan, Benni McCarthy may not have fulfilled his dream of playing for his favourite club but he has now managed to secure a coaching job with the record 20-time English champions.

The former striker has been recruited by new manager Erik ten Hag to join his first team coaching staff in a move that has sent South African social media users into a spin.

The appointment of the 44-year-old has been hailed as “massive” by McCarthy’s former international team-mate Quinton Fortune, who himself played for United between 1999 and 2006.

“This will be an out-of-this-world experience for Benni,” Fortune told BBC Sport Africa.

“This is so good because it will inspire the kids back home who can see one of their own now being part of the coaching staff at a club as big as Manchester United, who have a huge following in South Africa and across the world.

“It’s a great move by the manager because Benni can speak Dutch, Portuguese and Spanish.”

McCarthy had playing spells in the Premier League with Blackburn Rovers and West Ham United, scoring 37 goals in 120 outings between 2006 and 2010, and has since coached in Belgium and managed in his homeland.

Ten Hag was on the look-out for one more recruit to his backroom staff ahead of his first season with the Red Devils, and felt the former Ajax and Porto man had the right credentials for the job.

“There was still one place I wanted to fill, someone with a different voice, and Benni is that one,” the Dutchman told MUTV.

“He has experience as a manager. He was a coach in the professional level and he was a former striker, a really successful striker as well.”

Initial reports indicated that McCarthy had been brought in to work with the team’s attackers but Ten Hag envisages a bigger role for the South African.

“He will focus on the positioning and attacking,” he added.

“I’m not saying only the strikers, but also the integration from the full-backs and midfielders. Our way of play has to be dynamic.”