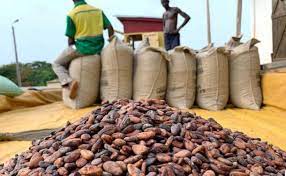 Chief Executive Officer (CEO) of the Ghana Cocoa Board (COCOBOD), Mr Joseph Boahen Aidoo has announced that the ongoing rehabilitation of all areas which have been affected by the cocoa swollen shoot virus disease will increase cocoa production to 1.5 million tonnes in the medium term.

Speaking at the Netherland Embassy’s Orange Cocoa Day event to highlight and garner support for Ghana’s cocoa sector, he said, “The cocoa industry has been plagued with the devastating impact of the cocoa swollen shoot virus disease. Close to 20 percent of the productive cocoa area in the country has been affected by this disease. This has led to low productivity and low incomes for cocoa farmers.”

He continued by urging cocoa farmers and service providers to be ready for the increase in production base.

“We are working to rehabilitate all devastated areas including overaged cocoa farms. The signal then is that in the medium term, Ghana is likely to move to 1.5 metric tonnes of cocoa and if that is going to happen, it means that service providers have to expand their base.”

Ghana has been producing below 800,000 tonnes of cocoa because of the disease which has gradually spread to cover every COCOBOD delineated cocoa region in the country.

According to the Cocoa Research Institute of Ghana, 12 strains of the cocoa swollen shoot virus disease have been identified, with the strains in the Western Region and adjoining areas of the Bono and Ahafo Regions more virulent than the other strains in the country.

A country-wide survey in 2017 revealed that, out of the total national cultivated cocoa area of 1.95 million hectares, about 17% of the cocoa tree stock was affected and over 300 million cocoa trees were affected by the disease.

In response to this challenge, government, through the Ghana Cocoa Board, secured a seven-year loan of US$600 million from a consortium of financial institutions led by the African Development Bank to tackle the swollen shoot disease and other challenges in the cocoa sector.

Vote For Me Based On My Track Record – Akufo-Addo

NLA To Get GH¢30m From KGL Technology Deal

Admin - August 24, 2020 0
The National Lotteries Authority (NLA) will receive an unprecedented financial commitment of GH¢30 million from the licensing of KGL Technology Limited for...