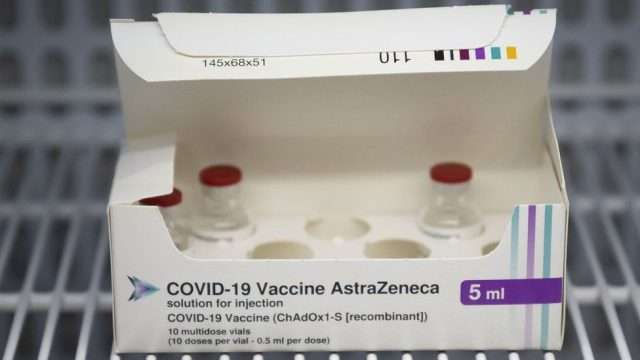 An expected reduction in the UK’s Covid vaccine supply in April is partly due to a delay in a delivery from India of five million Oxford-AstraZeneca doses.

The shipment, produced by the Serum Institute of India, has been held up by four weeks, the BBC has been told.

Housing Secretary Robert Jenrick said neither a single factory nor a country was responsible for supply issues.

The Department of Health insists it is still on track to offer a first dose to all adults by the end of July.

NHS England warned of a reduction in supply in April in a letter to local health organisations on Wednesday.

A spokesperson for the Serum Institute said: “Five million doses had been delivered a few weeks ago to the UK and we will try to supply more later, based on the current situation and the requirement for the government immunisation programme in India.”

A source told the BBC that although the original aim had been to deliver the next five million in March, there was not a stipulated time for the delivery of the doses.

Mr Jenrick told the BBC that the government had learned of vaccine supply issues “in the last few days”.

He said the UK had less supply of the vaccine “than we might have hoped for in the coming weeks but we expect it to increase again through the course of April”.

The vaccine rollout would be “slightly slower than we might have hoped but not slower than the target we had set ourselves” of offering a first dose to all people aged over 50 by 15 April, and all adults by the end of July, he said.

Anyone with an appointment for a second jab “should have complete confidence” that they will go ahead, he said, adding: “The month of April will be different – and it was always going to be – because I think this will be the month that second jabs exceed first jabs.”

On Monday NHS sources said there would be a big increase in the number of people being offered vaccinations in the coming days after the UK received the first shipment of the AstraZeneca vaccine from India.

Prof Martin Marshall, chair of the Royal College of GPs, said over the next two weeks the NHS would be pushing on with vaccinating over-50s and vulnerable people while it had a “bumper supply”.

He said the announcement of a shortage was “disappointing” news and it would impact “the group we were hoping to start on in April which is the people under the age of 50 without any pre-existing conditions” who would now have to wait until May.

More than 25 million people in the UK have had a first dose of a Covid vaccine, while around 1.7 million have had a second jab.

After opening up appointments to all over-50s on Wednesday, the NHS in England was then told not to offer jabs to younger age groups throughout April.

Prof Adam Finn, a member of the government’s Joint Committee for Vaccinations and Immunisation (JCVI), said the disruption to supply meant the UK’s rollout would be going from “extremely fast to somewhat less fast”, rather than “juddering to a halt”.

He told BBC Radio 4’s Today programme that the supply issues could affect infection rates but should not have an impact on hospital admissions, as those who are most vulnerable to Covid-19 were being prioritised for the jab.

Admin - September 26, 2021 0
The Ghana Police Service has said it has facilitated the medical treatment of affected persons in last Monday (20 September, 2021) brutalities perpetuated by...
General News

Selasi Aklotsoe - April 8, 2022 0
Ghana abstained as the UN General Assembly adopted a resolution on Thursday, April 7, 2022, calling for Russia to be suspended from the Human...
General News

Admin - September 2, 2021 0
Minister for Roads and Highways, Kwasi Amoako Atta has visited some road construction works damaged by last Monday floods in many parts of the...
General News

Ya Naa implore Dagbon to participate in 2021 population and housing...

Admin - June 18, 2021 0
The King of Dagbon, Ndan Ya Naa Abukari II who doubles as President of the Northern Region House of Chiefs has advised the Chiefs...