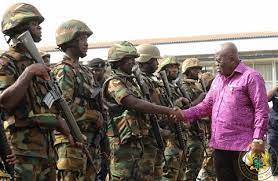 President Nana Addo Dankwa Akufo-Addo has commended the Regent of Bimbila, Nyelimboligu Naa Yakubu Andani Dasana for allocating 200 acres of land for the construction of the Forward Operating Base in the Nanumba North Municipality.

“I am grateful to you Gbanglana (Regent) and the Chiefs of the area for the land portion of land that you have given for construction of the operating base.”

Nana Akufo-Addo noted the government is doing everything possible to maintain peace and security within the country and protect the territorial integrity of the nation.

“These are all towards ensuring the security of the area and the security of our country; and we know that security has to be at the very forefront and the priority of engagements of the government to keep the people safe and to keep our government safe” he emphasized.

The President made the remarks when he addressed the Chiefs and people of Bimbila on Tuesday (August 9, 2022) as part of his two-day tour of the northern region.

The Ministry for National Security few months ago launched a citizens’ awareness campaign aimed at protecting the country against terrorist attacks.

The campaign, dubbed: “See something, say something”, encourages the public to be vigilant of the activities of suspicious characters and report such activities and characters to the security agencies.

The launch forms part of the ministry’s border counter-terrorism strategy aimed at sensitising the public to terrorism threats and encouraging the citizenry to collaborate with state security agencies to reduce the threat of terrorism in the country.

President Nana Akufo-Addo also appealed to the Bimbila Regent to lead the way to bring stability to the age-long chieftaincy unrest in the traditional area.

“And I want to assure you that, for however long it takes for those who are responsible for the criminal act in Bimbila, no matter how long it takes, one day they will be brought to book to answer their crime and that’s my personal assurance to you” Nana Akufo-Addo assured.

He added, “Now, there is no longer any dispute, you’re the rightful Regent of Bimbila. There is no dispute also about the succession to that; what we now need to do and all the language I’m hearing today is that, the people of Bimbila wants to come together, they want to reconcile so that we come have the peaceful funeral of the senior people who have gone before – once we can do that then we have the succession ahead of us”.