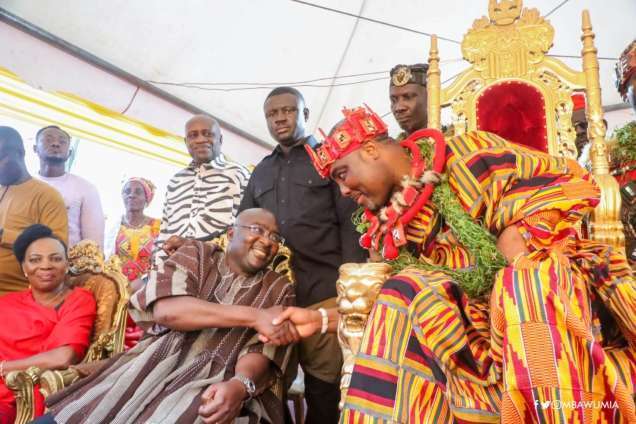 Vice President Dr. Mahamudu Bawumia could not behold his sight when he joined the chiefs and people of Ga Mashie (British Accra) celebrate the Homowo festival yesterday.

He was literally held spellbound as he watched scores of people pour to the streets of Jamestown and surrounding areas to observe the celebrations. This was when he paid courtesy calls on the Ga Mantsɛ, Nii Tackie Teiko Tsuru, the Gbese Mantsɛ, Nii Ayibontey, Sempe Mantsɛ, Nii Adote Otintor, Nii Ahene Nunoo III, Abola Mantsɛ and the Asere  Mantsɛ, Nii Nikoi Olai Amashi II.
Everywhere he went, the Vice President was received with spontaneous applause and cheers from the enthusiastic gathering.

Speaking at the Sempe Manstɛ palace, an obviously excited Bawumia “it is a beautiful festival and our Chiefs are the custodians of our tradition and this is why on behalf of the government and our party I’m here to pay homage to all the key chiefs in the Ga state.”

He encouraged the traditional leadership headed by the Sempe Mantse to keep up with the good initiatives being undertaken in the area, with a pledge to be a partner in that regard.
“Please continue to do all the things you’re doing to develop the Ga state. I want to assure you that we will be by your side to support you to continue to do the good work for the Ga state”, Dr. Bawumia pledged.

He gave meaning to that pledge by making a cash donation to support the reconstruction of the Sempe Mantse’s palace, and also presented assorted drinks to support the festivities.
The occasion was also graced by the National chief Imam of Ghana Sheikh Usman Nuhu Sharubutu, and some members of the Diplomatic Corps.

The traditional priest of Sempe later prayed for the Vice President, asking God to grant his heart’s desires.
Homowo. The Ga people celebrate Homowo which is translated as ‘hooting at hunger’ in remembrance of a devastating famine arising from a drought that occured in their history in precolonial Ghana. The festival starts in the month of August with the planting of crops (mainly maize and yam) before the rainy season starts.

During this period, noise making is prohibited or banned since it is believed that it will hinder the maturity of the crops.
Even though it is a Ga traditional festival, many other ethnic groups also partake in the celebrations.

Ya Naa charges Dagbon Youth Association to work for peace, unity and dev’t