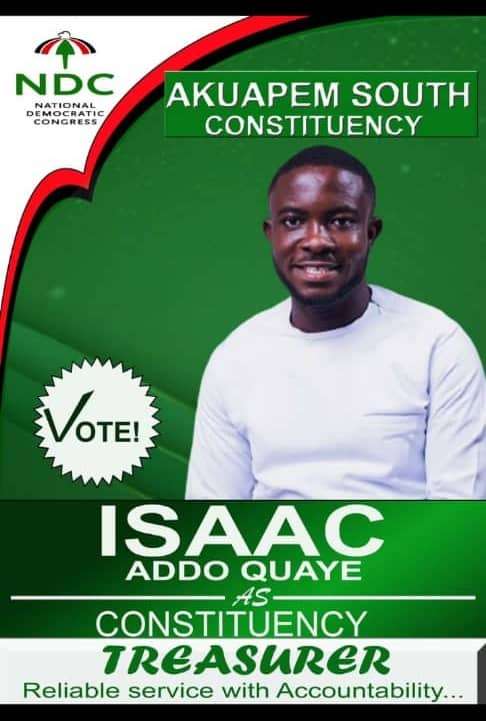 It was a dramatic scene at the main opposition National Democratic Congress (NDC) office at Akuapim South constituency in Eastern Region when Police stormed there to arrest one of the constituency Treasurer aspirants, Isaac Addo Quaye.

Isaac Addo Quaye was appearing before vetting committee that was set up by NDC ahead of the party’s upcoming constituency election slated for 22nd & 23rd October 2022 .

Isaac Addo Quaye is said to be a carpenter and serves as an intermediary between roofing sheets dealers and cunstomers.

It is alleged Isaac sometimes impersonate to be a staff of roofing companies and distribute invoices to prospectives buyers.
However, one of the victims who spoke to us on the condition of anonymity said that Isaak lured her to believe that he was a staff of a roofing sheets company in Accra.

After taking measurements of the building, Isaac brought an invoice of 18,000 cedis to the lady.

The lady then trusted Isaac and gave him the cash after which he assured the lady that he will deliver the roofing sheets with three days. But thecustodianghonline.com learnt that after weeks, Isaac disappeared and was not answering calls.

Out of frustration, the lady searched for Isaak without success.

Fortunately, the lady later watched her whatapp status only to see Isaac’s poster and pictures aspiring to be a constituency Treasurer of NDC in Akuapim South constituency.

Upon seeing the poster, the victim reported to NDC executives in Akuapim South constituency but they denied knowing the suspect.
The lady then asked the party executives of vetting date but they said they are done with the vetting.

Wednesday 5th September, the lady took police from Accra to NDC office in Akuapim South. Luckily, Isaak Addo Quaye was there waiting to be vetted.

The police picked him up.

He is currently at the Taifa police station waiting for police further investigation.