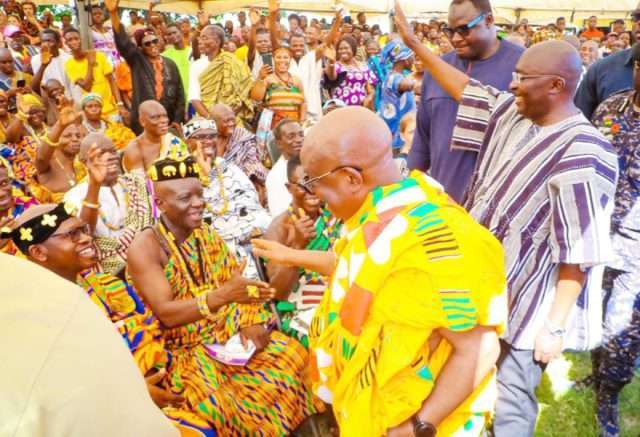 Dr. Bawumia led government delegation to the stronghold of the opposition party to mark the 60th anniversary of the Hogbetsotso festival of the Anlo State in Volta Region at the invitation of Awoamefia Togbi Sri III.

Members of the NPP chanted traditional and party songs to give Dr. Bawumia a rousing welcome to the festival grounds.

The party faithful mobbed the Vice President as he made his way to join other dignitaries at the event with chants of “Bawumia our next leader, Bawumia our next president”.

However, a section of the crowd believed to be NDC members were also shouted vociferously at the festival as Dr. Bawumia delivered his speech, chanting “away, away, away”.

Nonetheless, the Vice President was able to address the gathering with admirable confidence as he listed the achievements of the Akufo-Addo government in the last six years.

Vice President stated that the Akufo-Addo administration has created more jobs in the last six years than any other government in the Fourth Republic.

According to him, it is not only job creation but also, the government has built more schools, interchanges, airports than any other government in the Fourth Republic.

“We all know we are facing a global economic crisis which Togbe Sri III referred to.

“This is a crisis that is being felt all over the world and the cost of living accelerated across the globe.

“The increase in the cost of living has caused hardships not only in Ghana but many countries.

“In fact, the BBC noted about two weeks ago that so far, this year, in 93 countries we have had public protests against the increased cost of living. It is important to know, however, that amidst all of this turmoil, we should put things in perspectives.”

“The government of Nana Akufo-Addo has over the last six years taken many steps to reposition and transform the economy.

“So whiles we have hardships today, which we are working very hard to alleviate, and ‘In Shaa Allah’ (God willing), we will deal with it, let us not forget what we have been able to do in the last six years.

This year’s celebration of the Hogbetsotso festival was on the theme: “60 years of Anlo Hogbetsotso Za: Uniting for Development, Sustaining Our Unique Cultural Commonwealth for Future Generations.”

Vice President Bawumia used the occasion to call for togetherness since that brings about development.

The Hogbetsotso festival remembers the Anlos of their escape from the rule of Togbe Agorkoli from Notsie about 400 years ago.

The festival’s name is derived from the Ewe language and translates as “the festival of exodus” or “coming from Hogbe (Notsie)”.

Other chiefs and personalities, musicians from the Volta Region, and the diaspora also graced the historic ceremony.