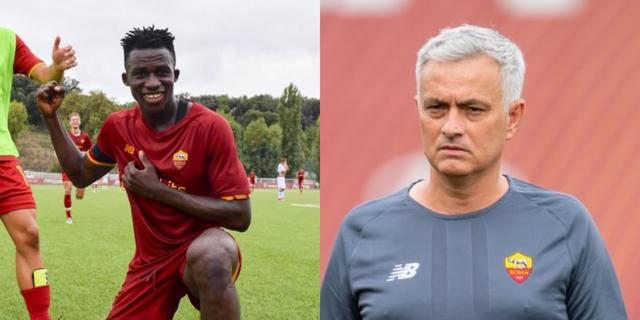 The striker has had an unforgettable first term of pro football, sparking comparisons with his compatriots who previously played under the Roma boss

Michael Essien… Sulley Muntari… Jose Mourinho has a fine history with developing Ghanaian players and with new sensation Felix Afena-Gyan, the former Chelsea and Inter Milan manager may be on the cusp of crafting his latest piece of work.

Upon joining Chelsea in 2004 after winning the Champions League with Porto, Mourinho was quick to identify Essien as one of his top priorities for his new adventure at Stamford Bridge. At the time, the midfielder was lighting up the French Ligue 1 with Lyon, having won the league title in 2004 and 2005 and the Super Cup in 2003 and 2004. But still, ‘The Bull’ was far from a household name in world football.

In August 2005, Lyon and Chelsea agreed on a £24.4 million fee after a long-running transfer saga, making the then 22-year-old Ghanaian Chelsea’s most expensive signing of all time. His acquisition unarguably remains one of The Blues’ best football business as he would go on to win two Premier League titles, four FA Cup honours, one Football League Cup, one Community Shield and a Champions League gold, with three of the titles (2005-06 Premier League, 2006-07 FA Cup, 2006-07 League Cup) coming under Mourinho’s tutelage before he left the Blues’ dugout in 2007.

Again, after his appointment as Inter Milan boss in 2007, Mourinho snapped up Muntari, who had just helped Portsmouth win the FA Cup. It would be another beautiful run for a Ghanaian under the Portuguese coach, as they won two Serie A titles, one League Cup, one Super Cup, and the 2009-10 Champions League title.

Fast-forward more than a decade and there seems to be another beautiful piece of the story blooming, albeit with a slightly different starting plot.

In May last year, Mourinho took up the job as Roma manager, only a month after the Italian side announced the signing of Afena-Gyan following an impressive trial stint. Having left Ghana only a few months prior, the striker was expected to take a good amount of time to get used to his new environment and was, thus, shipped to the club’s youth side.

However, it was not the start envisaged which played out, as the forward hit the ground running with goals for Roma in the youth league. Having been knocking hard on the door of the first team, it was unsurprising that Afena-Gyan was soon promoted to the senior team.

In October, the youngster was handed a Serie A debut by Mourinho against Cagliari. A month later, he went on to announce his arrival on the big stage in grand style, scoring a sensational double as a substitute to ensure a 2-0 triumph over Genoa.

There was even more to come for the now 19-year-old, as he helped Ghana to secure qualification for the 2022 World Cup, leading the lines in matches as big as play-off clashes with none other than arch-rivals Nigeria in March.

It could even get better for the teenager as he could end his first season of senior football with a big medal, with Roma having qualified for the final of the Uefa Europa Conference League.

From playing school football back home, to gracing Serie A, representing Ghana and now being all but confirmed for the World Cup in Qatar later this year, it has been a phenomenal transformation for the attacker in a matter of months. In all these, Mourinho, who believed in the Ghanaian, handed him opportunities so early and gave him the confidence to thrive, probably deserves credit more than any other.

Even then, Afena-Gyan, who has had limited opportunities at Stadio Olimpico, is far from a finished product.

He may be nowhere in the class of Essien and Muntari just yet, but Afena-Gyan’s promising Roma start signals a new Ghanaian weapon may just be under development under craftsman Mourinho.

Let Scientists Talk On COVID-19, Not Politicians – Akufo-Addo To Media

Selasi Aklotsoe - May 4, 2022 0
England’s Premier League has set in motion an action plan to aid the progress of young footballers from South Asian backgrounds into...
Sport