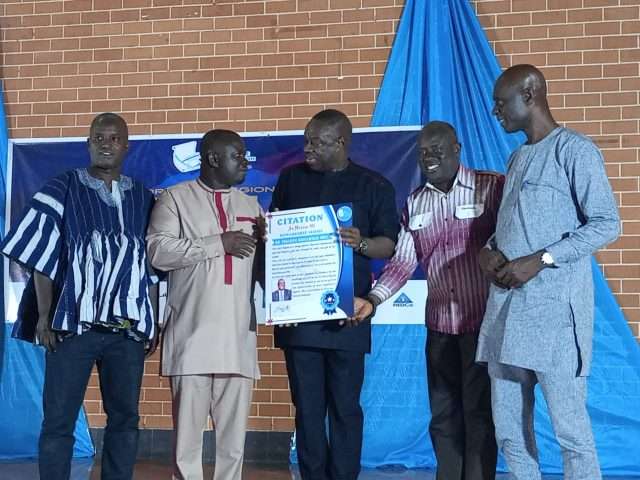 The Northern Regional branch of the Ghana Journalists Association (GJA) has honored the Minister for Tourism, Arts and Culture, Dr Ibrahim Mohammed Awal at the Second Edition of Northern Region GJA Awards night held in Tamale on Wednesday, November 2, 2022.

The association recognized the initiatives and policy propositions of the former Business Development Minister that have helped in the Akufo-Addo led government in creating jobs for the teeming unemployed youth of the country.

The GJA President, Mr. Albert Kwabena Dwumfour, who presented the citation to Alhaji Awal sided with the decision of the regional branch to honor the Ace Journalist and multiple awards winning businessman.

The citation reads: “Your story began as a young reporter, but with determination, zeal and tenacity, you rose through the ranks and got to the zenith.

“Now you are a globally recognized icon for your initiatives that have helped in creating jobs in our country. But for your generosity and benevolence, this event would not have been possible. For this and many more goodness and kindness, we the leadership of GJA in the northern region present this citation to you in recognition and appreciation of your magnificent support. May God continue to Bless you. Nawunu Bahama!

Speaking as the Guest Speaker for this year’s organized on the theme: “Promoting Tourism and Culture to create jobs: The Role of the Media”, Dr Ibrahim Awal commended the local media for the role in maintaining the existing peace in the region.

He asserted without peace, the developmental aspirations of the people cannot be met; thereby urging that, “Mr. National President, the tool you have in your hand is very important – whether you’re a radio journalist, newspaper, TV, Online or Social Media, use that tool as a weapon to galvanize society to achieve development, use that weapon to support government initiatives to bring about prosperity and development to the people”.

Despite the current economic challenges in the country, the Minister prayed the media to have confidence in the Akufo-Addo government to turn the economy around and make Ghana better.

The Minister further called on the media throw its light on tourism sites and highlight the potentials of the tourism sector for job creation.

He intimated this would enhance local integration, build a sense of national unity and redistribute incomes nationwide.

He added one million tourists are also expected to arrive in Ghana by close of December 2022. He estimated an amount of $2,200 dollars would be spent by each international tourist and the country will be making a cumulative revenue of about 2.4 billion dollars this year.

Governance is knowledge based — Sylvester A Mensah